P&C insurers can absorb the costs of Fiona 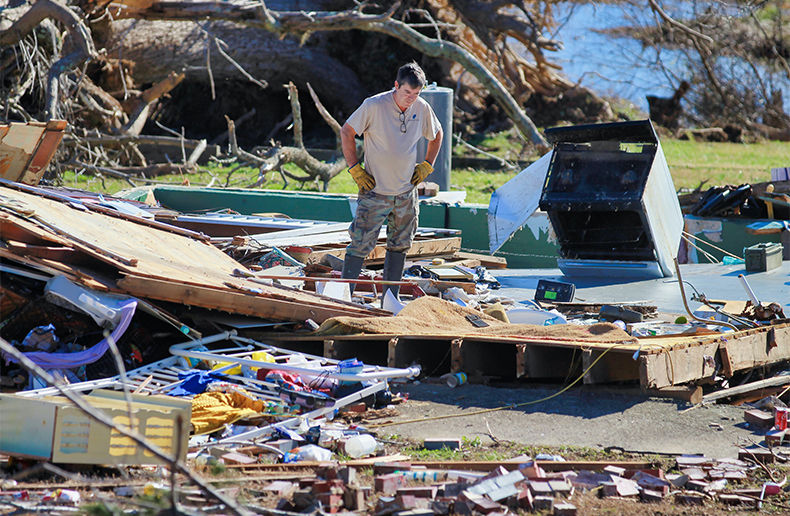 The damage caused by Hurricane Fiona in Eastern Canada last weekend was extensive, but Canadian insurers should be able to handle the losses fairly easily.

“Fiona will likely be one of the largest catastrophic events in history for Atlantic Canada,” says Patrick Douville, the rating agency's Vice President of Insurance in Canada.

“Initial estimates indicate that insured losses will be in the $300 million to $700 million range for the industry. This would be significant but not large enough to affect the financial strength of the large, nationally diversified insurance groups which are the top participants in the property insurance market in Atlantic Canada,” Douville adds.

The DBRS note points out that given the relatively small scale of the P&C insurance market in New Brunswick, Nova Scotia, Prince Edward Island and Newfoundland and Labrador, the volume of claims should be comparable to natural disasters in other parts of the country, which were manageable.

Data provided by MSA Research show that the four provinces represent $1.8 billion in direct written premiums in 2021, or 5.9 per cent of the Canadian home insurance market.

The total P&C insurance market in these four provinces is estimated at $4.8 billion. Home insurance premiums represent 37 per cent of this market. Auto and commercial insurance were also affected by the storm, to a lesser extent.

A signal to investors

Dreff says that insured damage related to Fiona will be largely associated with strong winds, which are included in policies, and much less with flooding. The rider for this type of loss is less popular with consumers.

Flood insurance is still not widely available, she says, which means there shouldn't be many claims related to flood damage in the Maritimes.

This is true across Canada, Nadja Dreff says. For a long time, insurers did not offer this coverage. They didn't have predictive models to properly assess this risk and price it accordingly, she explains.

The initial damage estimate of $300 million to $700 million is very preliminary, Dreff emphasizes. She adds that this estimate does not include claims that will come from the Magdalen Islands, which are part of Quebec. These islands were also hit pummeled by Fiona.

It will take insurers weeks or even months to tabulate the claims paid out in connection with Fiona, she says.

By issuing this note on Sept. 27, the agency mainly wanted to reassure the financial markets. Fiona was a big storm, a major loss that caused a lot of damage, she says. But in no way is it a burden that would threaten insurers’ financial health, she points out.

Small market, but damage on the rise

Since 1983, according to Insurance Bureau of Canada data DBRS cited in its note, no natural disaster in the Maritimes has ever made the top 10 worst losses of the year.

Fiona will have a negative impact on the results of the major Canadian insurers, but the effect on their solvency ratio will be negligible. Obviously, if a storm of this size hits a large, densely populated metropolis, the insured losses increase exponentially, says Nadja Dreff.

In a note dated Sept. 14, the agency pointed out that insurers need to review their risk assessment and pricing because of the greater frequency and severity of natural disasters. This warning also holds for the Canadian provinces, DBRS Morningstar said in its note on Fiona.

Losses from natural disasters averaged US$71 billion per year between 2012 and 2021, compared with an annual average of US$50 billion in the previous decade.

DBRS has not yet revised the credit ratings of major P&C insurers based on climate change, but this risk is factored into many components of the agency's assessment. These trends and impacts may weak the financial strength of P&C insurers, DBRS said in its note dated Sept. 14, 2022.

We read the reports and studies on climate change, and we know that natural disasters will be more frequent and more severe, Nadja Dreff points out, adding that insurers have known this for a long time, because their bottom line is being impacted,

The costs of natural disasters could far exceed the claims paid to policyholders in the past. The agency stresses that it is maintaining insurers’ credit ratings “to date.”

As insured losses escalate, the more insurers will have to adjust their premiums accordingly, making insurance less affordable and increasing society’s vulnerability to climate change, DBRS adds in its note.

We know there will be more climate change-related disasters, says Dreff. The Intergovernmental Panel on Climate Change (IPCC) reports have been saying this for years and it's time to act, she adds.

We are telling insurers that they need to update their models so that they are not just analyzing losses in the past. This not enough to predict the future anymore, Dreff continues.

Insurers’ forecasting models must therefore be scrupulously revised to reflect the latest scientific data, she says.

DBRS mentions that not only is historical loss experience an unreliable predictor of future insured losses, as the IPCC’s report published in March 2022 suggests, but geopolitical uncertainties also threaten GHG emissions.

Insurers will increasingly rely on reinsurance to manage their risks. After years of moderate growth, the Guy Carpenter reinsurance cost index saw its highest increase in 16 years in the first half of 2022, with a 15 per cent upswing in renewals.

Reinsurance goes through cycles like this. It's a global market, there's competition, varying policy terms, and a wide variety of claims, Dreff points out. When reinsurance rates climb, it's to compensate for losses incurred due to underpricing of past risks. The upward cycle lasts for a while, then it returns to normal, she explains.

Help is on the way

As early as Sept. 25, Canada's departments of Public Safety and Emergency Preparedness announced the creation of a joint program with the Canadian Red Cross to assist people affected by Hurricane Fiona. The federal government has pledged to match every dollar donated by Canadian citizens and businesses within the next 30 days.

Canadians who wish to make a financial donation to help the victims of Hurricane Fiona can do so through the Canadian Red Cross website, by calling 1-800-418-1111 or by texting FIONA to 20222 to make a $10 donation.

Insurance Bureau of Canada has deployed its Virtual Community Assistance Mobile Pavilion (CAMP). The information centre can be reached at 1-844-2ask-IBC (1-844-227-5422) and will be staffed by trained personnel from the Bureau's member insurers. They will answer claimants’ general questions about their home, vehicle or business insurance policies. A Fiona recovery web page has also been created.

In its Sept. 26, 2022 release, the IBC lists the losses that are generally covered by P&C policies and by optional coverage.

The IBC is also working with public authorities to create a national flood insurance program to extend coverage to the 1.54 million properties that do not have access to this insurance because it is either unavailable or its cost is prohibitive.