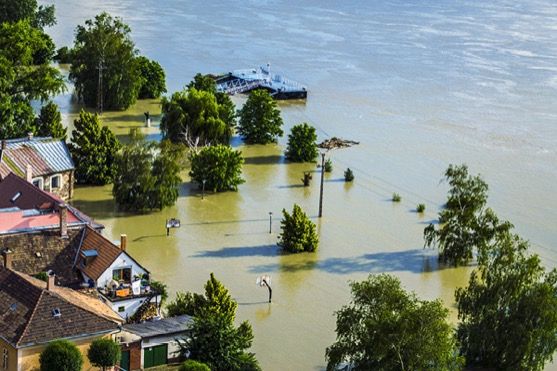 Recent studies confirm the irreversible rise in sea levels. The threat is particularly acute for coastal communities in North America, for which new protection measures are sorely needed.

The most recent study was unveiled on February 14 by the National Oceanic and Atmospheric Administration (NOAA), which is part of the U.S. Department of Commerce. The report, written in collaboration with several other federal agencies, updates data published in 2017.

The study confirms that by 2050, the sea level will rise as much as it did during the period 1920-2020. This 25 to 30 cm (10 to 12 inches) increase in sea level would result in permanent flooding of many coastal communities in the United States, according to the NOAA.

By 2050, high tides that could create flooding in populated areas could strike up to 10 times a year. Major floods, which currently have a 4 per cent chance of occurring in a given year, could occur twice a decade.

In the past, only major storms caused significant flooding in coastal areas. In 2050, such disasters will occur even during moderate storms or high tides, due to rising sea levels.

This 25-30 cm sea level rise in the contiguous US (CONUS) coastline is a national average for the United States but has large regional variations.

Sea level could rise slightly more in the Gulf of Mexico (10-15 cm higher) and on the East Coast (0-5 cm) compared with the CONUS coastline average.

On the Pacific west coast, sea level will also rise, but by an average of 10-15 cm less than the CONUS average. In the Hawaiian and Caribbean regions, the additional rise would be 5-10 cm less than the national average.

NOAA points out that even if greenhouse gas (GHG) emissions are reduced, and average climate warming is limited to 2°C compared with the preindustrial era, the impact on sea level will remain the same. The observed warming is already 1°C.

If international GHG reduction targets are not attained, as many experts predict, depending on the scenario, sea levels on U.S. coasts could rise from 60 cm to 2 metres by 2100, compared with the level observed in 2000.

On December 9, the Intact Centre on Climate Adaptation (Intact Centre) at the University of Waterloo released “Rising Seas and Shifting Sands,” a guide to coastline protection for coastal communities in eastern and western Canada. The guide does not address the specific problems of shoreline protection in northern Canada, where the issues are very different.

“We can no longer manage coastal risks by endlessly fighting against natural processes,” says report author Joanna Eyquem, Managing Director of the Climate-Resilient Infrastructure Program at the Intact Centre.

Eyquem is one of the experts invited to speak at the session on climate change on March 30, 2022, as part of P&C Insurance Day.

The average climate in Canada is warming twice as fast as the global average, the report says. Nearly 4.8 million Canadians, or 13.5 per cent of the population, live within 10 km of the coastline, mainly in British Columbia and in the Maritime provinces. In Quebec, some 147,138 people reside within 10 km of the 15,699 km of coastline (3.1 per cent of the population).

If the high-carbon scenario materializes (RCP 8.5) by 2100, sea level will rise by more than 50 cm in Quebec and eastern Newfoundland. The rise would exceed 75 cm in the coastal areas of New Brunswick, Prince Edward Island, southern Nova Scotia and the upper Bay of Fundy.

On the west coast, the largest projected increases by 2100 will occur along the coast of the Fraser Lowland, southern Vancouver Island and the north coast.

The measures described in the Intact Centre report, which are endorsed by the Standards Council of Canada, the National Research Council of Canada and Infrastructure Canada, fall into two key categories:

Both approaches can and should be considered and used together.

The Intact Centre guide proposes three strategies for scaling up the use of nature-based solutions. First, national standards must be developed to factor the benefits into decision making. Second, monitoring standards for coastal protection measures are required. Third, the private sector should be engaged in order to help finance, deliver, monitor and maintain nature-based solutions. The insurance industry can assist in these efforts.

In the Netherlands and Mexico

In fact, public-private partnerships (P3s) have already enabled several coastal resilience projects. The Intact Centre report gives the example of the sand dike on the island of Texel in the Netherlands, where a standard indemnity insurance coverage solution was used to support the implementation of the structure.

This island is located on the western side of the Wadden Sea, a UNESCO World Heritage Site. Its beaches and nature reserves make it a popular tourist destination.

In 2006, several sections of the Prins Hendrik sea dike needed to be reinforced. A dredging company proposed to place five million cubic metres of sand and to plant two million marram grasses in front of the existing rock/concrete dike.

Swiss Re contributed to the sand dike by insuring the project against all construction-related risks. The dredging company purchased the policy, which also protects the municipality, the water management agency, engineers and contractors.

In the state of Quintana Roo, Mexico, a parametric insurance product was used to protect a coral reef. Purchased in 2017 by regional governments, the Swiss Re policy developed in tandem with The Nature Conservancy triggers a claim payment if a Category 4 hurricane hits the area where this barrier reef, the longest in the western hemisphere, is located.

Rising sea levels are afflicting many other areas of the world. For example, Indonesia's parliament recently passed a law that will allow the country's capital to be moved from Jakarta to the rainforest of Kalimantan, on the island of Borneo.

Situated on the island of Java, in the most densely populated in the archipelago, Jakarta is home to more than 30 million people. The city is quietly sinking due to the frequent major floods affecting its coastal area.

The project was announced in 2019, and the work, which was to begin in 2020, required an estimated investment of $33 billion to build the new capital. It would cover an area of 560 km2 in the middle of the rainforest, according to Geo magazine.

A Courrier International report published on January 19 mentioned out that the transfer of government activities would begin in 2024, and would involve the relocation of 25,000 public servants annually over four years.

Statista journalist Tristan Gaudiaut wrote that this would be the second time a state has had to move its capital due to environmental problems. Belize, in Central America, moved its government to Belmopan in 1970 following a hurricane that devastated the capital, Belize City.

Belmopan is located 82 km inland from the former capital. The area of Belize is 22,966 km2, slightly larger than the administrative region of Bas-Saint-Laurent. The country is bordered by Mexico, Guatemala and Honduras.