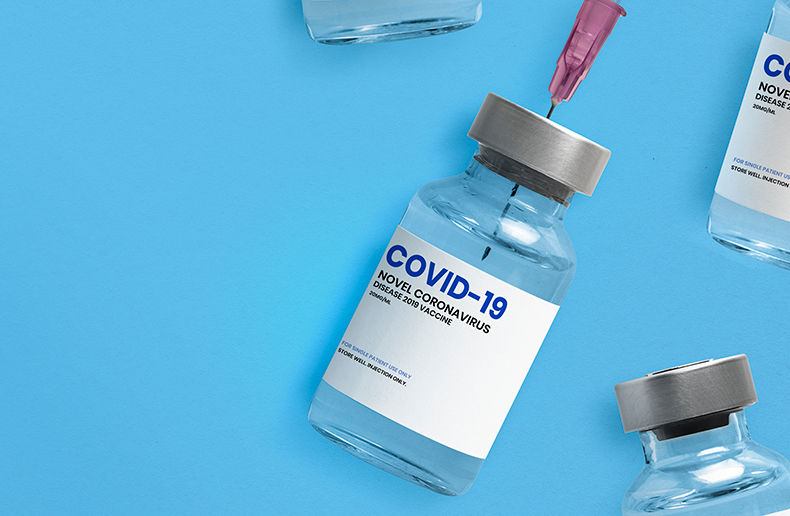 New modelling on the Ontario population done by the Canadian Institute of Actuaries (CIA) shows that the likelihood of a fourth wave of COVID-19 infections between now and April 2022 is very high unless the province achieves a 90 per cent full vaccination rate.

The study was released on August 11. The Future of COVID-19 in Ontario: Variants, Vaccines, and Avoiding Future Waves was produced by a special CIA team formed for this project. An insight statement that summarizes the study findings is also available on the Institute’s website.

The CIA says the severity of the fourth wave will depend on the health authorities’ ability to implement 90 per cent full vaccine coverage.

“Even though the starting model was for Ontario, we believe the CIA’s findings and conclusions apply to other jurisdictions as well,” says Alison Rose, Chair of the CIA’s Research Council.

CIA President Jacqueline Friedland says she hopes the modelling will help the Ontario government and the public better understand the interaction of COVID-19 risk factors.

The CIA’s analyses were based on a model for the spread of the virus originally developed by Drs. Ashleigh Tuite, David Fisman, and Amy Greer of the University of Toronto. The project team added factors that influence the COVID-19 pandemic such as seasonality, public health forecasts, vaccination data, health measures, and the effect of new variants.

Based on its modelling, the CIA concludes that the most important factor in maximizing the vaccination rate is the public’s willingness to be vaccinated. Receptiveness is even more important than the effectiveness of the vaccines, the Institute points out.

The study confirms that government interventions can mitigate the impact on the health care system, but as soon as they are lifted, infections resume and rise exponentially. In addition, unvaccinated individuals will be at greater risk of becoming ill in future waves triggered by new variants.

“I believe the most important take-away from our findings is that there are ways to mitigate the risks of COVID-19 going forward. There are good reasons to be optimistic,” notes Garett Klus, one of the CIA's Pandemic Modelling Project team members.

“Understanding how these different risk factors interact means we can build policies and actions that more effectively address pandemic factors in evolving ways,” he adds.

CIA modelling shows that full vaccination of nearly 90 per cent of the total population may be needed to prevent a fourth wave of the pandemic in the last quarter of 2021, due to seasonality. The infectiousness of the variants and the actual efficacy of vaccines against these mutations will determine the appropriateness of this target.

The CIA researchers note that given that the biology of the COVID-19 virus was evolving more quickly than the Project Team could update the model and analyze the new results, the actual data collection was limited to Phase 1, which ended on April 1, 2021. At the end of this first phase, the modelling included the variable transmissibility rate relative to the original strain under different scenarios.

“We assumed the vaccine effectiveness against the variants to be 70 per cent of the 94 per cent effectiveness assumed for the original strain (i.e., 66 per cent effectiveness),” the authors write. All variant scenarios analyzed in Phase 1 showed a third wave in the spring of 2021, which did happen, and a potential fourth wave in late 2021. The impact of the pandemic subsides during the summer months.

According to the CIA model, even under pessimistic assumptions of variant transmissibility, a highly effective rollout of the vaccination campaign would eliminate a fourth wave in the fall. 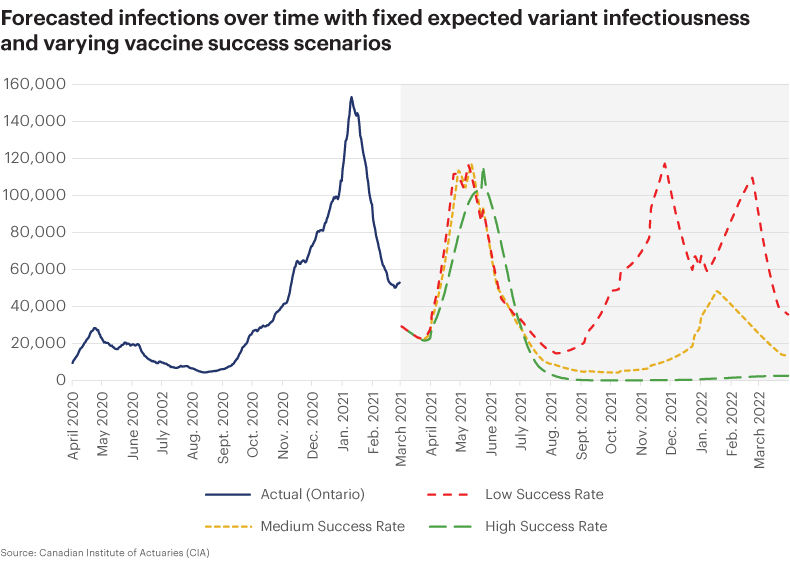 In the low vaccination success scenario, the modelling predicts a high level of infection throughout the summer of 2021, resulting in a double peak at the end of the year and in early 2022.

In the pessimistic scenario for both COVID-19 transmissibility and vaccination prospects, there is a high risk of an extreme fourth wave as early as this fall.

“We found that results were more sensitive to population willingness to vaccinate than to vaccine effectiveness,” the authors add. At rates of 80 per cent for both willingness and effectiveness, the model predicts that ICU hospitalization cases should peak at 120 in the winter of 2022.

If the population’s willingness climbs to 90 per cent, even with only 66 per cent effectiveness against variants, the peak in ICU cases should not exceed 50 in spring 2022.

Vaccines are assumed to be still highly effective against severe cases, are less good at staving off mild infections.

Without adequate vaccine coverage, governments need to maintain or impose restrictions to control the spread of the virus. Early, strict lockdowns virtually eliminated COVID-19 in some jurisdictions, but this strategy has become much less practical as the pandemic progressed, the study adds.

“It is important to recognize that when the health-care system is overrun, death rate will increase with limited medical resources,” the authors say. This is why the model takes into account the capacity of the critical care network.

The emergence of new variants led the researchers to conclude that people who have been vaccinated or already infected with the virus could catch the virus again. The study suggests that if the vaccination campaign is highly successful, any form of lockdown would not be necessary.

Cost of employer medical benefits forecast to rise 7.5 per cent in 2023
Ontario pharmacists can now prescribe for minor ailments
Ontario expands use of biosimilar drug treatments
Mental illness and diabetes treatment up among younger workers
Infographic