Lac-Mégantic: A financial advisor at the heart of the tragedy 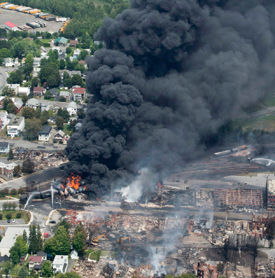 Michel Proteau is a financial advisor in Lac-Mégantic. Several of his clients did not survive the explosion that followed a train derailment in early July. In an interview with The Insurance and Investment Journal, he says he has come to understand the very essence of life insurance because of this terrible event.

“Immediately after the tragedy, I went into the office to consider how to proceed. I also had a good idea of who would be missing. My son is only in this world because he missed a text message. Otherwise, he would have joined four friends at the Musi-Café...On Sunday, I laid out my game plan and I contacted all my insurers on Monday, explaining what to expect, because I suspected that there would be unidentifiable remains,” he explained in an interview with.

He emphasizes that, because he was working alongside insurers, he was already able to start settling cases with just a death certificate. “It was necessary to reach out to people...We made requests that things proceed more quickly. Claims processing needs to be done, even if what we are experiencing is not easy.”

Proteau knows, however, that his trials are not yet at an end. “We know there will be another stage: disability. We are already seeing some signs: burnouts, people who have lost loved ones, or others who have lost their jobs,” he comments.

He adds that processing a case can sometimes be difficult on a personal level, as everyone knows each other in this town of 6,000 people. “The associates go to see the cases and find it difficult, especially for a death. We brought in support workers for them. I’ll take care of myself later,” he says.

He adds that people are somewhat comforted when they receive a call from him. “Still, there are a lot of emotions. I had to wait a few days to talk to the parents of my son’s friends. I rang in the New Year with them and they came to my cottage regularly. We were like family. One does what needs to be done despite everything. I just delivered a form to a woman who is burned out, who lost a daughter. It’s not easy to go through it, but it has to be done. It’s very moving,” says Proteau, who expects to attend funerals throughout the next two or three months.

He adds that the uncertainty that looms over the city is causing residents stress, which will have an effect on group claims. “We do not know what will happen to the city’s centre. You can still hear the pumps siphoning oil from basements. It has entered into the sewers. Several employees are on stand by. Some might go a year or two without work. It will be tough until we begin to rebuild, and until we finish grieving, but we have no choice but to continue,” he says.

Proteau also noted that the sale of life insurance has taken on new meaning for him. “In some families, we have claims for life and group at the same time. I even met with children named as beneficiaries. We cry with them... In some cases, it becomes difficult to talk about it, but we are going to get through this ordeal,” he says.

The hardest part, according to Proteau, is knowing where to stop. “We want to do as much as possible. We want it to go quickly and we want to save everyone. We do what we can, but we can not save the city and you can not go faster than everything else that is happening,” he concludes. (For more on Lac-Mégantic, see Long-term support offered through group insurance).

10 major transactions from 2020
Sale of Optima Global Health: “A necessary transaction to reach the next level”
Telemedicine: a new player enters the market
Dialogue acquires Optima