Keeping an eye on business growth and succession planning 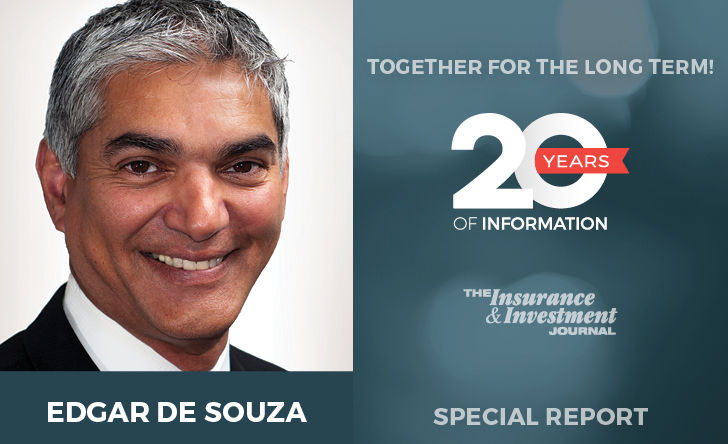 Since starting his own firm in 1986, Edgar De Souza, CLU, CHFC, CFP and president of Ontario-based De Souza Financial Corp. has managed a successful business during a period in which the industry has undergone vast change. De Souza, a former Canada Sales Congress speaker, recently celebrated thirty years in the industry and has no plans to retire anytime soon. In fact, he is looking at expansion.

He says in the coming years, he sees his company becoming 10 times its current size. “I see myself expanding from being a lone wolf to having a team of players who will look after different areas of the business.”

In terms of the industry, De Souza says consolidation will continue to occur and the industry will evolve into two different types of financial advice firms; ones that deal traditionally or digitally.

“There’ll be companies that’ll deal with the internet-based family market or people who don’t want an advisor. There will also be companies that will stand out and be involved with creative ideas by using insurance as a vehicle for wealth in the future,” he says.

De Souza says the biggest opportunity in the market currently and in the future is using insurance as a corporate vehicle for corporate owners.

“The biggest opportunity is using insurance as a corporate vehicle to provide not only protection for the corporate owners but also as a means of accumulating funds for their later years.” De Souza says it’s a big opportunity that has often been missed by advisors.

In De Souza’s view it is important to start the discussion at least ten years before you plan to retire or stop working in the business. In the past couple years, thanks to the support of his MGA, he has been able to develop a draft succession plans for a likeminded person to take over when he plans to retire or should something happen to him.

“I’m 55, I know I will probably work until I am 75 or to I die because I love what I do. However, I already have a couple of scenarios pre-planned on what’s going to happen right now and what will happen in 10 years.”