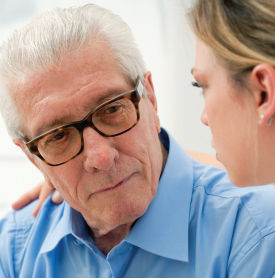 It didn't take long for the warning signals to go off for lawer Corina Weigl. A partner at Fasken Martineau in Toronto, Ms. Weigl had just spoken to an advisor who had told her about the second wife of a client who wanted to change her husband's RIF beneficiary from his children of his first marriage to her.
The advisor was asking Ms. Weigl if he should refer some new wills her way as part of the estate planning process, but she had another thought.

“I told him: ‘You should stop before doing anything more for this client. You need to go out and meet this client personally and make sure that this is what he wants. Are you confident you are getting instructions from the right person?,” Ms. Weigl asked.

“It took me saying that to him for the bell to go off. And he agreed and went out and met with the husband. And you know what? I never got the call to do the wills.”

With a growing number of Canada’s population aging, there is increased concern among governments, police and other organizations about the amount of financial abuse taking place among the elderly. In March, officials highlighted abuse among the elderly as part of Fraud Prevention Month.

The federal Department of Justice states that about 35 per cent of crimes against the elderly, including financial crimes, are committed by family members. Pat Murphy, a wills, trusts and estates lawyer in Ottawa, who is also a lawyer for the Alzheimer’s Society, estimates about 90 per cent of elder abuse is financial.

One of the major causes of the abuse, says Mr. Murphy, stems from granting power of attorney (POA) to an adult child. It’s not unusual, he says, for the child to “borrow” money from a parent’s accounts to pay off the child’s bills – sometimes to the tune of thousands of dollars. “Nobody notices this until after mom or dad passes away or something else surfaces.”

But much of this can be pre-empted by advisors by giving heightened importance to the term “knowing your client” and paying attention to a pattern of unusual requests or events, especially if it’s coming from the person who holds the POA, said Ms. Weigl.

A typical KYC form is a simple snapshot of a person’s circumstances, but it’s talking to a client about their relationships with family members over time that enables an advisor to truly know that client, said David McGruer, a certified financial planner in Ottawa.

“When you start talking about their estate planning, you get a sense of the relationships, the strengths and weaknesses of the family members,” said Mr. McGruer. “This is so that if something comes up outside the norm you have a great degree of context in which to place that. If you don’t know the situation in great depth, how could an alarm bell go off?”

Ms. Weigl said advisors should keep a sharp eye out for any impairment aging clients may have in terms of their vision or hearing and assess their financial needs as well as their investment experience and risk tolerances. All of this is with the goal of making the advisor tweak to any “suspicious” changes in their clients’ investments and to instructions that do not make sense for the client.

This doesn’t mean advisors need to become proficient in how to assess capacity – that is done by a “capacity assessor” such as a psychologist or a gerontologist, she said. “But they should be attuned to when a client’s memory may be slipping and therefore open to vulnerabilities and influence,” she said.

When dealing with POAs, advisors should ensure the document is valid and pay attention to the types of transactions the person with the POA is requesting, said Ms. Weigl.

For example, be cognizant of any transactions that do not benefit the client, such as joint accounts, changes to beneficiaries and gifts. She also suggests that if it’s a new client and language is an issue, get an interpreter to help translate the client’s wishes.

When a parent, for example, wants an adult child to be in charge of his POA, he should introduce the child to the advisor and to the lawyer long before capacity is diminished, said Ms. Weigl.

Keeping information current is also important. A 2011 BMO study indicated that almost half of Canadians over 45 had not re-visited or updated their wills in 10 years. “Work to build a long-term relationship with a client,” said Mr. Murphy.

Mr. McGruer said he finds there is a weakness in general in the financial advice profession when it comes to tax and estate planning because that’s not what the advisor typically does. To that end, he makes the estate planning discussion part of his annual review with clients.

In addition, he suggests advisors work with a lawyer, as he does with Mr. Murphy, in getting clients set up with their POAs and wills. This kind of relationship gives him a great advantage in helping steer clients in the right direction, particularly ensuring that wills and POAs are updated properly and written according to the client’s wishes.

“This way, we can avoid the alarm bells and the red lights through pre-emptive preparation. Having your affairs all lined up ahead of time is a relatively rare thing in my experience. I think the value of having that work done is almost immeasurable,” said Mr. McGruer. “Why wait for the alarm bells to go off when it’s often almost always too late to do something?”