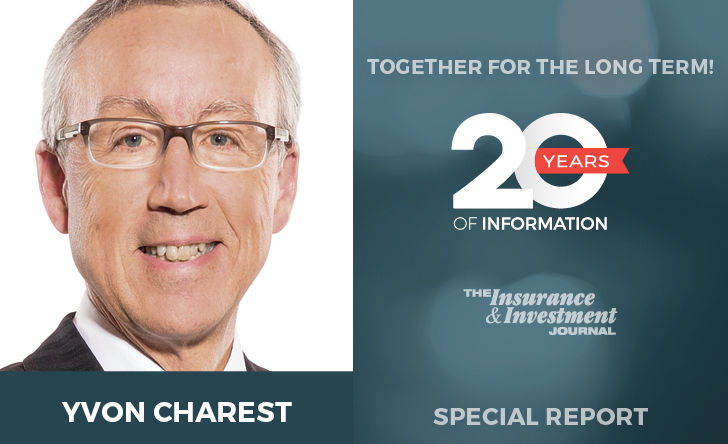 No one can say Yvon Charest, president & CEO of iA Financial Group, is afraid of a challenge or two.

It started when iA Financial, at the time just one of 11 insurance companies with a head office in Quebec City, decided to pick up the competition gauntlet a number of years ago and expand outside both the city and the province.

“The territory was becoming too small for us,” explains Charest. “I think the local competition forced us to expand our geography and also expand into new products [like wealth management].”

Within a generation, Charest says iA moved from a “tiny life company” active only in Quebec to a Canadian-based financial services institution with a range of products, including life and health insurance, mutual and segregated funds, securities and property and casualty insurance. Now 60% of its operations are outside of Quebec, including the United States, and about 37% of its net income comes from wealth management, a number he expects will grow to at least 50% within a decade. A publicly traded company after it demutualized in 1999, iA Financial Group’s market capitalization ranks 11th in Canada with more than $120 billion in assets under management, says Charest, who joined the company in 1979.

Going forward, Charest expects growth for the industry as a whole to be yet another challenge. Currently, the industry is growing organically at a rate of about 5% a year; public companies are managing about twice that amount with half coming from acquisitions, he says. “But the consolidation in the life insurance industry in Canada is such that it’s becoming increasingly difficult to find the right acquisition, the one where you will have a competitive challenge.

“This is why in 2008 we made the decision to expand into the U.S. This year, one-third of our sales were made in the U.S. and the rest in Canada. So we have somehow turned a challenge into an opportunity.”

An increasingly digital world has meant another hurdle to the financial services industry, especially since it is often seen as a way to go directly to consumers, bypassing advisors. iA Financial, however, is one of the few remaining companies with a captive life insurance sales force numbering 2,000. Charest says digital can also become a positive when used properly and in the right area of business.

Companies whose business model depends heavily on guaranteed products with long-term features may also encounter some problems in the future, especially since experts are predicting returns on most active classes will be lower for the next decade or two than they have been in the past 20 years, says Charest. It was one of the reasons behind Equibuild that was launched about a year ago, offering flexible universal life insurance with a guarantee surrender value and the potential of annual bonuses. Equibuild accounts for about 5% of sales so far, he says.

The biggest change Charest says he’s seen in his years at the company is that the insurance industry has a much better reputation than it did before.

“We were known as an industry that moved slowly, that was not necessarily dynamic. I don’t think that’s the case anymore.”