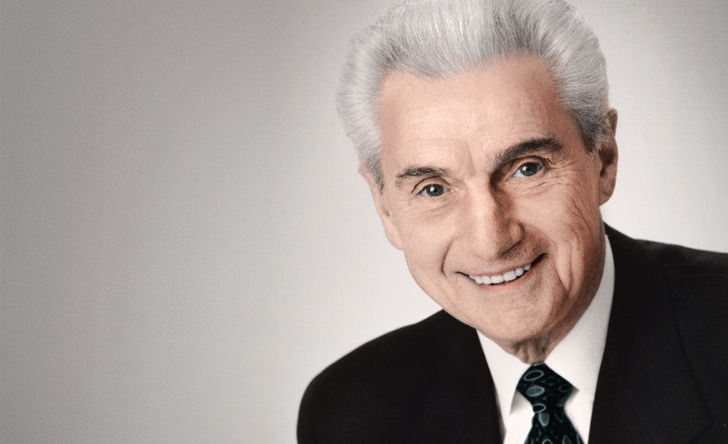 At 87 years of age, he still takes training courses and attends annual events put on by London Life and its parent companies. Over 98 per cent of the business he’s written remains on the books to this day. Stephen Pustai still has dinner regularly with the first client he ever sold a policy to, and he remains as a constant presence at the Million Dollar Round Table meetings, held throughout the world each year.

The London Life advisor celebrated his 65th year with the company on February 2, having joined London Life back in 1953. He’s written a book, titled Dreams Can Come True, which is published in three different languages. In print for more than 20 years, he continues to sell the autobiographical story – written and published after his son Rob died of a heart attack at age 35 – at MDRT meetings each and every year.

“I just got this email a little while ago from Mexico. He read my book and he sent me a letter saying what the book meant to him and how much he appreciated it,” Pustai says. “I get that kind of feedback. The book has been a catalyst to many good things happening. I’ve met a lot of nice people. It’s been interesting.”

All sale proceeds from Dreams Can Come True are donated to St. Joseph’s Hospital, in Hamilton, Ontario.

Today the 39-year member of the MDRT is also member of the board of directors for the MDRT Foundation Canada. Pustai is a member of the Canadian Association of Gift Planners, and continues to be a major sponsor of events held to support the Joseph Brant Memorial Hospital and the St. Joseph’s Healthcare Foundation. An Advocis member for 64 years, he has also held key positions within that organization, promoting the value of membership. In 2017, Pustai was a speaker at the Canada Sales Congress.

The Burlington-based advisor says he’s high on relationships, and it shows in the way he talks about the clients and colleagues he’s befriended over the years.

In addition to the persistency of the business he’s written over time, his staff relationships have stood the test of time as well – three representatives he hired 30 and 40 years ago still work with the company today.

Before life insurance became his calling at age 21, Pustai worked as a milkman for Silverwood Dairies in Hamilton. To get that position, he kept in touch with the hiring manager for over three months. Initially he applied for a job alongside 30 other candidates. Rather than walk away, he asked to speak with the manager. “I said I would like to meet you, if you don’t mind, so that you’ll know I’m interested,” he says. After meeting the manager, he called again, three months later and was hired for the position.

That drive, which would later serve him well in insurance sales, caught the attention of his route foreman at the company, who later told him about the opening with London Life.

Although Pustai initially laughed when given the opportunity, the next day he apologized for his rudeness and ultimately convinced his foreman to give him another shot.

He credits his wife Barbara for her support during those early years – initially Pustai had to take a $15/week decrease in his salary to join the insurance company in exchange for the chance that he’d earn a substantial bonus at the end of six months. “Her faith in me, at that point, really resonated with me. She trusted that I would be there and I would be doing my best. Can you imagine? At the end of six months with London Life, I had a check for $6,000.” ($6,000 in 1954 is worth over $55,000 in 2018.)

Three years after joining the company, Pustai was promoted to a management position. After moving around for several years, he eventually transferred back to the Hamilton East branch, working as regional manager, fulfilling his dream of returning to the place where his career began. Pustai ultimately worked as a manager for close to 40 years in total, at one point leading a staff of 44 agents and four managers.

“We had a wonderful agency,” he says. “I decided I would apply for early retirement and just look after my own clients – I had 1,250 clients at the time.”

Unfortunately, as he was planning to hand the business over to his son, Rob died suddenly on Thanksgiving weekend – one day before the pair were going to announce their transition plans. He began writing his book in the aftermath of that event and had it published four years later.

Eventually Pustai did take a retirement contract with the company and began working as a financial security advisor with Freedom 55 Financial in November 2000.

Despite the loss of his son and the loss of his beloved wife Barbara in 2005, Pustai remains graciously and persistently upbeat and focused on the opportunities which present themselves to be of service to others.

“Stephen is an outstanding example of commitment and dedication,” says Great-West Life, London Life and Canada Life executive vice president, Nick Pszeniczny. “Over the years, he has lived and breathed his passion, shown through his constant presence at annual programs, his community and industry involvement and his unwavering support of his clients. We feel privileged to have been partners with Stephen on his journey.”