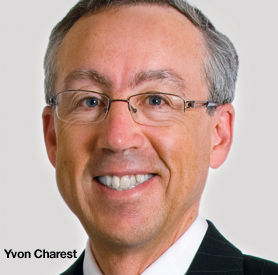 Insurers are increasingly limiting the amounts they agree to insure at the standard rate in level cost policies.
With interest rates low, eking profits from whole life and level cost universal life insurance products is a mounting challenge. In response, several companies have reduced the maximum life insurance amount that they grant to clients without requiring a surcharge.

This trend in level cost policies is forcing advisors who specialize in the entrepreneur and professional market to split large life insurance cases among several suppliers. That way advisors can offer the client a better price, as they remain within each insurer’s limits. Although this practice is not new, advisors are now slicing the pie into even smaller pieces.

Claude Ménard, senior vice-president, at PPI gives the example of two brothers who co-own a company. They each buy $150 million in insurance under a level cost universal life policy, at different times. The first obtains the full amount from three insurers in 2010, but a year later the second brother had to go to eight insurers to procure the same coverage.

This type of fragmentation affects the bonuses that advisors receive for large amounts. “The advisor gets only 60% of the compensation in the second case compared with the first case,” Mr. Ménard points out.

The culprit: interest rates. Their fluctuations are eating into the profitability of level cost products. Hiking level cost prices was insurers’ first response to the interest rate problem, says John E. McKay, executive vice-president and actuary at PPI. The industry would have acted sooner were it not for the competition.

“Until a couple of years ago, it was common practice tor insurers to price LCOI based on long-term yield assumptions in the 6% range. The reality is that insurers should have started to increase their LCOI rates as much as 10 years ago, as interest rates had already dropped to sufficiently low levels at that time to warrant price increases,” Mr. McKay says, adding that it’s not over: “Most insurers offering LCOI have already announced two rate increases over the last two years. We may see a third increase announced sometime later this year or early next,” he explains.

Lowering guaranteed rates within the products is another way to support profitability. In March, Manulife Financial lowered its minimum guaranteed interest rates in its universal policies InnoVision, Limited Pay UL and Security UL.

For its part, Sun Life Financial has reduced its dividend rate paid to whole life par policy holders This reduction is 0.25% for the period of April 1, 2012 to March 31, 2013.

“Until the last few years, it was common for these LCOI maximum face amounts limits to be $20 million but some insurers set their limits at $50 million or more. Virtually all insurers reduced their maximum face amount limits for LCOI and sometimes to as low as $5 million,” Mr. McKay points out.

Often, clients who exceed the limit will be slapped with a hefty surcharge, the PPI chief actuary explains. Some insurers set this premium according to a percentage of the insured amount. John McKay says that the situation gets complicated for advisors when clients pass the limits.

“The complication starts with the fact that the agent could not tell a prospective client how much the insurance would cost. The process was further complicated by virtue of the fact that the surcharges could best be minimized only if the desired total coverage was broken into separate policies placed with different insurers,” Mr. McKay explains.

BMO Life Insurance set a limit of $10 million in its LCOI projection software. This limit is not new, Daniel Walsh, vice-president, business development explains. “You hear about this trend a lot, but we didn’t change anything over here.”

Reinsurer agreements influence the limits insurers set for well-off clients. “We analyze the situation of each client whose insured amount exceeds the conditions foreseen in our reinsurance treaty,” Mr. Walsh says.

Transamerica Life Canada focuses on a middle-class clientele. The insurer also capped the automatic insured amount in its level cost policies at $10 million. “We preferred not to quote files beyond this limit. We think that advisors will insure the rest with another supplier,” Pierre Vincent, senior vice-president, product strategy & business profitability. Beyond a certain threshold, profitability is at stake, he adds.

All the same, such amounts make up only 1% of cases the insurer processes. More specialized in the high net worth market, an insurer like RBC Insurance would receive more. A dedicated network at PPI is working with private label products in cooperation with this insurer, including the universal life insurance concept and the 10-8 leverage loan strategy.

Sources at PPI mentioned that RBC lowered its maximum amounts. The insurer, however, did not confirm this.

Like their clients, reinsurers are limiting their share of the risk, says André Langlois, vice-president, development and marketing, individual insurance at Desjardins Financial Security (DFS).

“For a $15 million, $20 million or $25 million policy, often the reinsurer no longer has the capacity it needs. It has to turn to a retrocessionaire. The reinsurer probably cannot obtain the price originally agreed upon with the insurer,” Mr. Langlois continues.

With six life reinsurers operating in Canada today, each must swallow a larger portion of the risk pie, Ms. Châtelain explains. Munich Re, Swiss Re, RGA Canada, Scor Re, Optimum Reinsurance and Aurigen shared $47.3 billion in life insurance premium liability with insurers in 2010.

The most widespread practice in Canada is proportional reinsurance, where the insurer will keep 25% of the risk on one policy and cede 75% to the reinsurer.

Ms. Châtelain notes that insurers tend to keep less risk. “Because of interest rates and more stringent capital rules, we reinsure much more than in the past,” she says. Reinsurers must then divide up the risks among themselves.

Reinsurers are prudent, she adds. They audit their clients’ underwriting practices before deciding on the limit to grant for a given product. “Reinsurers rely on risk management and the insurers’ underwriting practices.” Beyond the authorized limits, the usual rates no longer apply, she adds. As a result, insurers have reduced their maximum amounts to protect the limits they have succeeded to obtain from their reinsurers.

John McKay, of PPI, thinks this phenomenon of reduced maximum amounts is only temporary – it should vanish with the next long-term rate hike, aided by steady rises in level cost prices. “As insurers bring their LCOI rates up to levels that provide more appropriate profitability in a low interest rate environment, the need for them to impose such large surcharges on larger face amount LCOI contracts should decline. Also, it may allow some of these insurers to increase the current maximum face amount limits which apply to LCOI to something closer to their past levels,” Mr. McKay says.

Canada Life Re and Zurich extend plan coverage to $3 billion
MIB acquiring the APEXA compliance platform
The General Motors longevity risk deal was one year in the making
RGA completes transaction with Manulife to reinsure longevity risk of 45,000 annuitants
SWISS RE

Investment in 2023: Signs of a recession prompt calls for caution
Flood Insurance: Solution expected by late 2022
Flood insurance: A roadmap for the national program
Swiss Re appoints new senior vice president
MUNICH RE